Radiant images from the renowned 19th-century biologist and illustrator Ernst Haeckel feature tiny organisms that live in water. You'll be enthralled by Haeckel's unparalleled artistry and attention to detail.

Whether you are a jewellery designer, a scientist, a graphic artist or naturalist, you will find something new to inspire you in Haeckel's work.

Germany, in the 1800s was very much the leader of the development of new concepts in biology. Ernst Haeckel was an active member of that scientific community. He is best remembered for his art – particularly his beautiful illustrations of plankton – notably the medusae, siphonophores and, his great love, the radiolarians.

He influenced the art of his times and continues to do so to to this day: his classic works are used in art schools and by artists around the world.

His most famous book, Kunstformen der Natur (Art forms in Nature), contains just 39 images of the full set of 342 images of plankton that Haeckel and his illustrator jointly produced. The remaining images are spread thinly through other published work. Books with the images have been published by Prestel and, if you can spend time hunting, you'll find images of varying quality on the internet. Sadly, many of these are made by scanning thick volumes, this can cause severe shading as well as low resolution. Copies of important works System der Medusen (1879) and Challenger Reports are scattered about in a small number of specialised libraries, and thus their use for study and teaching is severely limited.

In effect they are a lost treasure.

A group of us associated with the School of Ocean Sciences at Bangor University decided we would make images of the plates in the Challenger Reports readily available at no cost on the internet.

We located a mint condition copy of the Reports in the archives of the Royal Society of Edinburgh, in some volumes the pages were still uncut and so had not suffered from use and exposure to light. The archivist, Vicki Hammond, agreed to allow us to take three volumes of reports to the Royal Botanical Gardens in Edinburgh for high quality reproduction. The Challenger Society, a UK scientific and research organisation, provided us with funding to enable this and also to visit to the Haeckel museum in Jena where we acquired supporting material and information. The images were then cropped and aligned, to prevent any loss of detail or information, no further processing has been made – thus the user can work with the primary images.

These high resolution images are available for free downloading at a number of sites including http://haeckel.bangor.ac.uk/, from which links to other sites are also provided.

While we were collecting the images, we considered how attention could be drawn to this resource. We came to the view that this would be best achieved by producing a book with a selection of the collected images.

As the publisher - Prestel - had already produced two successful facsimiles of Haeckel’s images, they were the obvious choice and they welcomed the idea as an extension of a successful series. We chose to base the book – which became Art Forms from the Abyss - on the format Prestel used for Art Forms in the Oceans. A 144 page book was agreed, containing 55 full colour plates, plus an accompanying text of some 8,500 words, giving a brief description of plankton and their role, a short description of the biology of the three specific groups (the medusa, siphonophores and the radiolarians), the background to Challenger Expedition, and finally Haeckel’s science and art.

Each image is accompanied by a facing caption page, containing minimal information: species name and an indication from where they were collected (broad geographical area and depth) and the organism’s size.

Articles about the new book

The Art of the Remarkable Ernst Haeckel

Born in 1834 in Potsdam, at that time Prussia, Ernst Haeckel initially trained as a physician, but his interests lay elsewhere, notably in shapes and patterns in Nature and their evolution. Art Forms in Nature was published as a series of 100 lithographs at the turn of the 1800s. These images are as powerful today as when they must have been when they astounded the public at the time of their first publication. Artists continue to draw upon these images to create jewellery, textiles and ceramics; also architects: Binet, and possibly Gaudi, have used them as inspirations for architectural design.

It is Haeckel’s images of the drifting plankton of the oceans that are the most captivating. Away from our eyes, in most cases, hidden in the darkness of the seas, they exhibit forms and patterns of life quite alien to us, and seem of another world, perhaps, being mostly invisible to our eyes, they really are.

Ernst Haeckel’s image of
a group of radiolarians 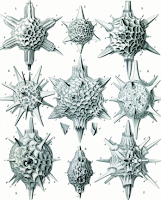 Detail from Haeckel’s drawing of
the siphonophore Alophota 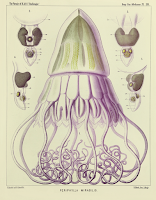 Haeckel’s image of the
medusa Periphylla mirabilis
They range in size from the microscopic, commonly small fractions of a millimetre, to massive jellyfish that can reach tens of metres in length. His work for the Challenger Expedition reports focussed on three groups of planktonic organisms – two groups of jellyfish – the Medusae and the far less known set of diverse and fascinating organisms – the Siphonophores - and his great love the tiny radiolarians. His images of these creatures are both beautiful as objects in themselves, and provide a fascinating insight into scientific illustration from an era when photography of any kind was in its infancy and colour photography was completely unavailable.

Monsters from the Deep

"What would an ocean be without a monster lurking in the dark? It would be like sleep without dreams"

The quote is attributed to Werner Herzog although, a well-read American colleague - Malcolm Shick - suggests he may have taken it from John Steinbeck and Ed Ricketts book in Log from the Sea of Cortez (1951): " Men really need sea monsters in their personal oceans. ... An ocean without its unnamed monsters would be like a completely dreamless sleep." 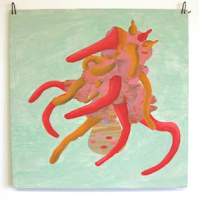 Siphonophores are bizarre cousins of the medusa and share with them the general label “jellyfish, and also the propensity to sting using powerful adapted cells called nematocysts. A sting from one of the clan, the Portuguese Man ‘o’ War (Physalia physalis), although not fatal, if experienced will be long remembered. Contact with the box jellyfish (Chironex fleckeri), on the other hand, can lead to cardiovascular collapse and death, normally within 2 to 5 minutes.

The Siphonophores are, in many cases, denizens of the abyss and take on bizarre shapes. One is reminded of the old Cornish litany (the Scots also lay claim to it) asking from deliverance from “Ghoulies and Ghostsies and Long Leggity Beasties and things that go Bump in the night”. On a dark and stormy Winter’s night, you certainly wouldn’t want one of these beasties, up to 40 metres long, silently gliding into you bedroom and coasting round flashing red phosphorescence. You’d pretty quickly be on your knees dialling 999 (or 911) to the Almighty requesting the emergency services. 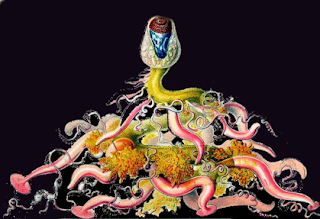 And could Cannophysa murryana not be the prototype for Smaug, of the Middle Earth, sleeping atop his hoard, with gold and gemstones embedded in the skin of underside.

The Voyage of HMS Challenger

The First Space Exploration
The British set up a major expedition to look for life in a part of space about which we were totally ignorant. No, this was not in the latter part of the 20th Century; it was 100 years earlier in the late 1800s, nor was it some distant planet; it was the 90% of Earth’s oceans which at that time lay unexplored and generally regarded to be devoid of life.
The expedition (from 1872 through 1876) aboard the original Challenger (the Royal Navy corvette HMS Challenger) was the equivalent of the 1970s Viking Expeditions to Mars, and it was not only every bit as adventurous, but also infinitely more successful in so much that it recovered and defined over 4,000 species, all of which were new to science.

Furthermore, it ended up paying for itself!, as it gave rise to the discovery of massive phosphate deposits (guano from sea birds) on an uninhabited island - Christmas Island - in the Indian Ocean. The British planted the Union Jack on the island claiming it for Queen, country and profit!. The tax revenue, arising from the sale of the bird shit, matched the cost of the expedition, so we still have a lot to learn from the entrepreneurial Victorians.

The space shuttle Challenger was named in recognition of HMS Challenger achievements and fittingly the Apollo 17 lunar module that landed on the Moon in 1972 was also named Challenger.

Artist’s Fascination with Patterns in Nature and the Mathematical Beauty in Scientific Images.

Many artists are accomplished naturalists in their own right. Likewise scientists have through history shown an admiration for the fluid beauty and almost complete freedom that art allows.
There are many who have been able to tread the fertile area between art and science, one of the most famous being Leonardo da Vinci; and in more recent times the eminent 19th century German scientist Ernst Haeckel is another. These rare individuals are blessed with the skill and vision to extract images from Nature that satisfy both fields of endeavour, which is perhaps an art form in itself. It is Haeckel’s work and influences that this blog explores.